The change in speed limits come into effect from the 24th April.

But millions of motorists are unaware of spiralling penalties.

Under the rules drivers caught for the most severe cases of speeding could be fined one and a half times their weekly take-home pay. A motorist who is earning £50,000 a year would pay up to £1,000 for travelling 41mph in a 20mph limit. There will be a cap of £2,500 for speeding on a motorway, and £1,000 on other roads. 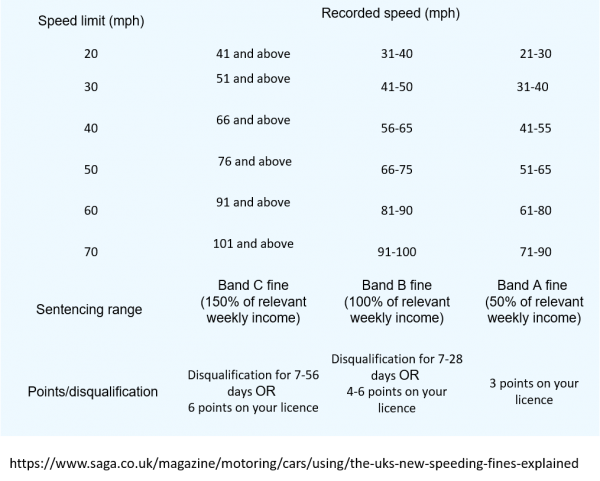 The Information  comes from

Magistrates have the power to fine motorists by up to 150 percent of their weekly take-home income. The current limit is 100 percent. The new rules also allow minor offences to lead to fines of up to 50 percent of an offender’s weekly income.

If you get caught driving at a speed that will land you with a Band B or C speeding fine, the magistrates may believe your speeding is too serious for penalty points. In this case, you may be disqualified from driving for a period instead of being given penalty points.

The Highway Code lists the speed limits paragraph 123 and the type of sentences that are going to be made, but now it has changed

The Opportunity to go for a Speed Awareness course has not changed you can go to https://ndors.org.uk to find out how this works.

The change in speed limit fines creates a big stick to try and reduce drivers from wanting to race. However having a powerful car and a habit of speeding. Also, the companies expecting their employees to get to places at unachievable time limits