THIS LIKELY TO BE ONE OF THE MOST DANGEROUS manoeuvres THAT YOU MAKE!

How to deal with a moving situation.

When overtaking a moving vehicle consideration must be given to safety. A misjudgement could easily result in a collision course with another vehicle. Remember the LADA Procedure. Overtaking is likely to involve the judgement of speed and vehicle separation distance. Consideration must be given to the acceleration and braking characteristics of the vehicles involved. The speed limit should not be exceeded. Do not allow yourself to get impatient when due to road conditions you are unable to overtake another vehicle. The more you are worked up the more likely you are to have an accident. It is better to be late for an appointment rather than DEAD. Before deciding to overtake, four checks should be made:

Assess the speed and position of the traffic behind you.

Hold back and try to see both sides of the vehicle for oncoming hazards such as junctions, parked vehicles, cycles, oncoming traffic, pedestrian crossings, road signs, markings and possible problems etc.

Remember to look for road signs, markings and junctions. Also other vehicles ahead and behind you that might stop or endanger you from overtaking. Any other situation, which might put you or the vehicle being overtaken in danger. Now you should have enough information to make a judgement to see if it is necessary and safe to overtake.

IF YOU CANNOT SEE A SAFE GAP FOR YOUR VEHICLE TO OVERTAKE AND PULL INTO,

DO NOT GO. IF IN ANY DOUBT, DO NOT OVERTAKE.

BE PREPARED TO TAKE EVASIVE ACTION IF SOMETHING GOES WRONG.

Check rearview, side mirror and blindspots.

Show what you intend to do.

Accelerate smoothly using the correct gear being prepared to take evasive action should the situation require it, wait until you see the passing vehicle and see it in your rearview mirror before moving back in. YES, it is another MSM.

If overtaking on a dual carriageway or motorway you will not only need to signal to change to the right-hand lanes to overtake but also signal to move back into the left-hand lane. (This is not necessary on a single carriageway.)

OVERTAKING ON THE LEFT

DO NOT overtake on the left unless: you are moving in a queue of traffic and the queue on your right is moving slower than you, or traffic is signalling right and position to allow you to pass. (Occasionally one-way roads and roundabouts provide opportunities as well.)

Always plan. Think about what could happen next and what if something was to happen. You will need extra time if you intend to overtake a long vehicle because they have extended blindspots increased stopping distances

(HC 219 – 225). Trams need special consideration because they like trains run on rails so that they cannot get out of your way. They are also silent and tend to stop in places you might not expect. At nights, make allowances for the reduced visibility.

On Dual carriageways and motorways give yourself extra time before pulling in as pulling in early can cause the vehicle you have just overtaken to take evasive action and make the situation dangerous.

How to deal with a stationary overtaking situation.

As you approach always look at the alternatives be prepared to take evasive action in case something goes wrong.

Give room from the object you are overtaking as well as allowing room if necessary for traffic coming towards.

Overtaking on a hill. If overtaking on hills remember that you might need to allow extra safety margins for acceleration and braking. If you are going uphill it will take longer to accelerate to get by. If you are going downhill it will harder to slow down because of the weight of the vehicle. This is only advised where it is necessary and SAFE i.e. Crawler lanes. If a large vehicle tries to overtake you on a hill remember that it might take longer than normal to overtake you or have trouble slowing down after it overtakes you.

Trams need special consideration because they like trains run on rails so that they cannot get out of your way. They are also silent and tend to stop in places you might not expect. At nights, make allowances for the reduced visibility. 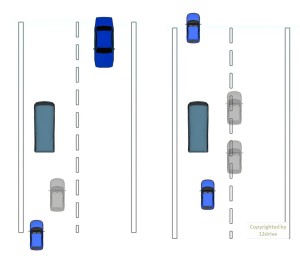